I have this friend Lindsay.

She makes whiskey cake, lives for the punch line, and sounds like a hummingbird for all that she can accomplish in a day.

But before that was true was this – I have this friend Susan.

Susan talks with her hands like she’s conducting an orchestra, can converse with fairies and makes a sound when she laughs that an adjective for which has not yet been invented.

Susan and I had already been friends for 15 years by the time she brought Lindsay along. And THAT was 10 years ago. The equations were concurrent for some time – Susan + Lindsay, Susan + Christa. A V shape, with Susan at the joint. It wasn’t until Lindsay moved to Vancouver for a year that we permutated to include Lindsay + Christa. And from there, well, greatness.

(This photo is from the first week I met Lindsay, and I must reiterate that was 10 years ago, when she, Suz and I had a do-your-worst Value Village dressup party. Lindsay, in silver, clearly won.)

I have this friend Aynsley.

Nine years ago when I announced I was going to move to England to become a folksinger and abandon my budding career working in television production, everyone scoffed and scorned. But Aynsley arrived at my desk with a small Union Jack to remind me of my destination while I worked to save the money for departure.

Aynsley can charm words like some are said can charm bees. Once, and I can’t recall the occasion but I was on the brink of a tizzy, likely, she said to me “ne panic pas”. It charmed me right out of my fevered state with a smile.

“Ne panic pas” has since become my favourite go-to mantra – far more effective for me than, but similar in meaning to, “just breathe” or “all you have is the present”. I can’t stomach the latter adages but the franglais nugget “ne panic pas” can almost always do the trick.

It’s like a Disney-free hakuna matata for a Canadian audience. A “don’t worry be happy” with the beauty of Bobby but sans commercialism and Cocktail soundtrack. Sweet, simple, and funny, non? I imagine those that read my blog likely don’t need this explained, you, dear reader, being such a kindred spirit. Thus in turn I imagine you saying to the screen “I get it, carry on!”

Very well. The time line in this tale spans years and we’re dashing about, forward and back. But this turn is to the very recent past.

“Ne panic pas” I said to Lindsay. She was on the brink of a tizzy, you see. “Ne panic pas!” Like you, Lindsay gets it of course and the darling woman took the phrase to heart, and, in true Lindsay fashion, to needlepoint. I received shortly after in the mail: 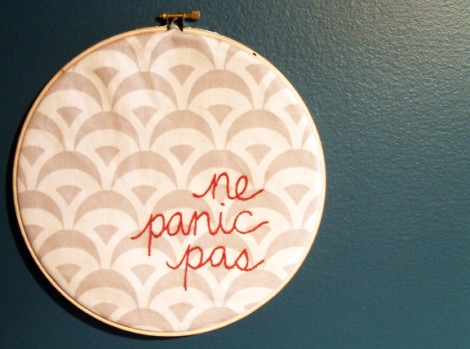 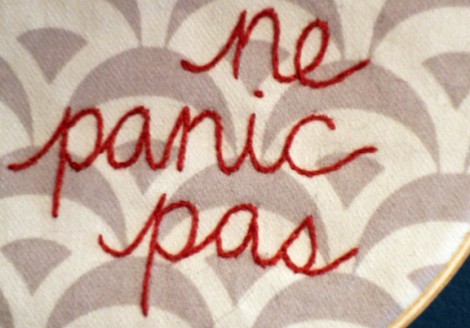 The package opened, I held the embroidery in my hands and jumped up and down shouting and laughing “Look! Look!” to no one in particular.

The beauty and oddity here delights and ignites me – fuel to a giggling fire. What starts with silver-pants-dance parties leads to hand stitched art – both hilarious, both so damn LOVELY. I can barely stand it, the magnificence of the dots we connect over the years.

It hangs beside my desk and I refer to its wisdom daily. Ne panic pas. Take your time. Take thread. Wait for the punch line.