I’m a huge CBC Radio fan. Any time I’m on tour and I get to stop at a new station in another Canadian town I get a thrill just posing in front of the large, requisite logo that adorns every CBC entrance. Over the years I’ve slowly been able to meet my favourite broadcasters – from Bill Richardson, Shelagh Rogers, to Sook Yin Lee.

The time first time I met Sook Yin was over the phone for an interview on DNTO in 2008. I was mid-tour for The Wedding Singer and The Undertaker and stopped at CBC studios in Saskatoon. Last month, not only did we get to work together in person, but in front of a live audience at Vancouver’s York Theatre.

And as you know, I love to tell stories. This one started in February when DNTO producer Andrew Friesen sent me an email asking if I had any story to tell for an upcoming “objects of affection” episode. Our conversation lead to me sharing my recent essay for Room Magazine, Wallflower, Late Bloomer, and, once we dialled it down – with extra help from and big thanks to another DNTO producer Kaj Hasselriis – we settled it: my object of affection was my new leg.

You know, my robot leg, aka the flower leg, the fancy leg, the result of the incredible crowdfunding campaign the Kneeraiser; my prosthetic leg that houses the microprocessor RHEO knee. The knee that changed my life as an amputee about a year and a half ago.

After a few months with that new knee, last summer the life change became highlighted in an unexpected way – on the dance floor.

The tale spans losing my leg at 13, an awkward junior high dance, and my new knee changed everything. I won’t spoil it for you – just go have a listen to live performance here. 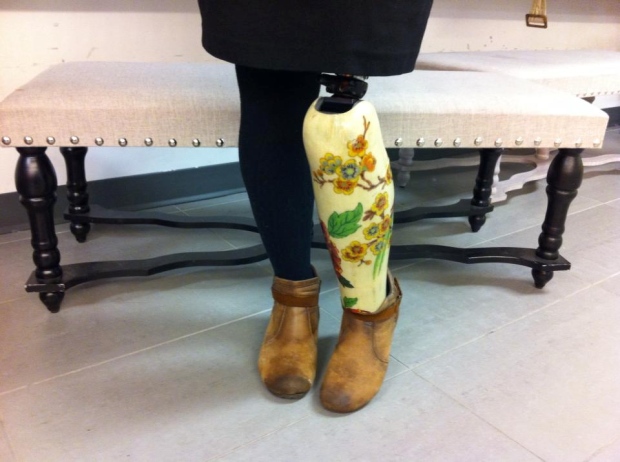