In eight days I hit the road for seven weeks of touring. I’m not yet ready, but I think I will be by the time I start loading the car next Friday.

Summer technically has a few weeks left in it but I never really got used to not thinking that Summer ended when school started, and so with September, and this tour about to begin, I feel I’m shifting to Autumn. I’m shifting to something anyway, and thinking about these summer months coming to an end.

It has been almost entirely a summer of sweet – the sting coming one July afternoon in Vancouver when I watched a wasp land on my arm. I’m terribly afraid of bees, wasps, and buzzy things that sting and have been convinced for years, despite a lack of evidence, that I’m allergic to such things. Frozen by fear and envisioning, should I try to swap the wasp away, that it would only fly into my face and disfigure me for life, I watched the bugger slowly hump my arm before I just closed my eyes and practiced my breathing. Despite my stillness, it stung me – jerk – and I in turn, was fine, save for the mild stinging in my arm. Thus, not allergic. And actually, now, less afraid. Phewf!

But back to the sweet parts.

I’ve mostly been in “head down, album out” mode these last couple months, but a number of festival gigs did keep me coming and going out of the town and province.

It all kicked off with a band at Aboriginal Day Live in Winnipeg. That was a sweet gig. I was delighted to perform with a full-band, and have a king sized bed all to myself in the lovely Forks Inn. I like how I can lay in any direction in a king bed without even a toe hanging over the edge. I’m little that way. Despite being on Vancouver time, I woke early each day in Winnipeg and spent the first couple hours getting computer-y stuff done from my laptop in the middle of that cushy island of a bed. Delightful.

Here’s the view from my hotel room of the Abo Day Live festival being set-up the day before: 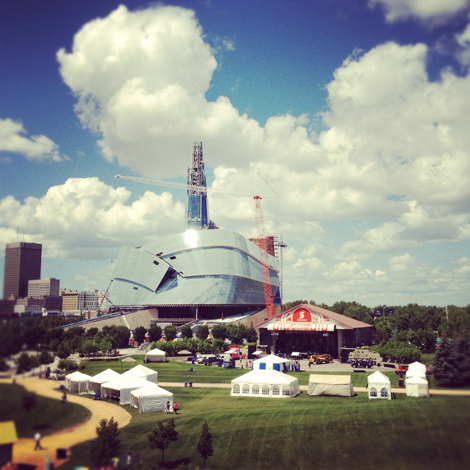 and here’s me and the band – Niko Friesen, Murray Atkinson and Don Benedictson –  after our set, which was a blast: 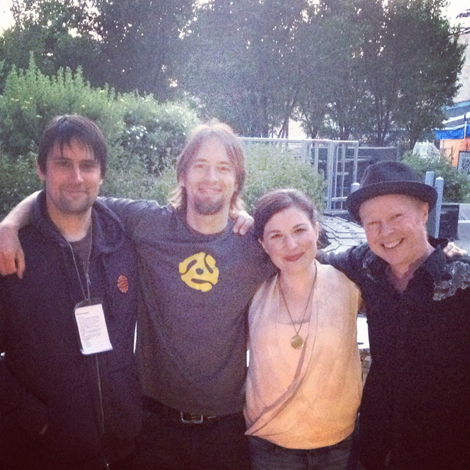 Backstage we were noticeably – in comparison to a couple of the other artists performing that night – lacking an entourage. Murray quipped:

and we returned to our hotel rooms to drink whiskey. It was a great weekend.

In July I traveled to the All Folked Up festival in  Montmartre “the Paris of the Prairies” Saskatchewan. It is a darling festival run by a group of inspired, dedicated and energetic woman. This was its third year and I look forward to seeing that festival grow. Raised in Alberta, I’m a prairie girl at heart and it was nurturing to be under those big skies for a few days.

Singer-songwriters Corinna Rose and Gabrielle Paplillon and I spent the week following that festival playing a handful of shows in Saskatchewan. Here we are a the start of those days, in front of Montmartre’s own tour d’eiffel: 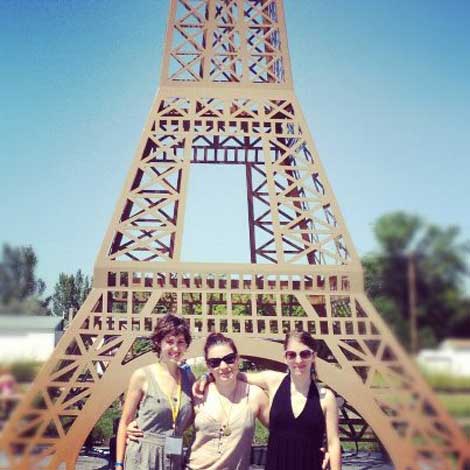 and near the end of our week together, all smiles in Val Marie: 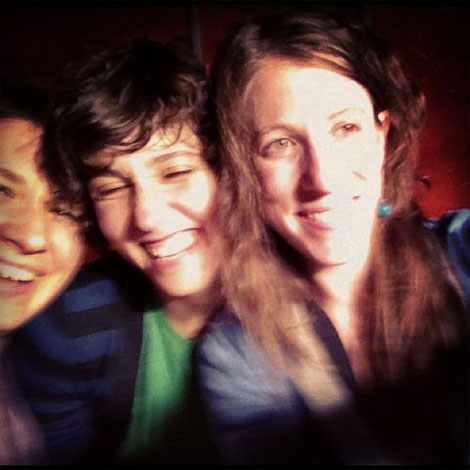 They are lovely poetic songbirds both of them – check them out at corinnarose.com and gabriellepapillon.com.

This summer also included my first trip to ArtsWells. Now here in British Columbia, it seems every artist has been to ArtsWells. It’s like Christmas, as far as familiar faces, family and friends in the music community go. So I’d HEARD. It hadn’t panned out over the years for me to go, but this year the stars aligned. And YES, it might well be the best. Corin Raymond described it well as “a place where a song can change your life” and I’m so glad I made it to that mountain town this year. The calibre of music and artists is outstanding – Geoff Berner, C.R. Avery, Kris Demeanor, High Society, Jaron Freemon-Fox, Steve Brockley, Morlove, Scott Cook… damn. It was all very, very good. Here’s Orkestar Slivovica rocking the crowd outside the hall (they’re in there somewhere, but blocked by the happy dancers): 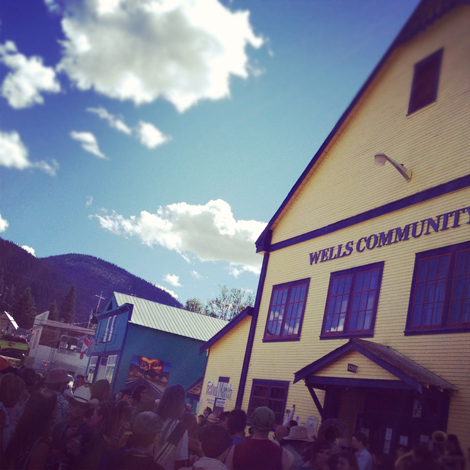 There’s only a glimpse of it above, but every house and building is painted a different colour in Wells. You’d like it there.

Then back to Vancouver. Then my sixth flight to Winnipeg in the last year, where the road lead to TroutFest in Ear Falls.

After I picked up Veda Hille, my TroutFest carpool buddy, and an artist whose work I’ve admired and adored for  years, at her friend John’s, I asked her as we drove away “is John a musician?”. “Um, yes he’s in a band called The Weakerthans.” Oh. THAT John. I’d never seen him up close, what can I say! I did take a second to text my husband that I’d refilled my water bottle in THAT John’s kitchen, thinking of the early days of our courtship when he would play Reconstruction Site for me on the guitar. Husband does a pretty good rendition, actually. After that brief moment of squee, Veda and I drove into the Canadian Shield and shared stories of children and husbands and music and Bill Richardson and were very fine folk fest buddies indeed.

After TroutFest (lovely), I played Desert Daze – another blossoming festival in its third year that I also look forward to seeing grow and thrive – and with that my folk festival season ended.

Which brings me to today, and to my to-do list, and to my album coming out in a week, and to the CD release kick off show in eight sleeps, and to packing light so Scott and Jeremy and I can fit the many instruments into the Mazda 5 for our weeks on the road… after C.R. and I first spend five days on the island. So. Much. To look forward to.