We spent four days at The Warehouse studio this past week getting much of what will be my new album recorded. Those four days were a long time coming, nearly a year in the making (more if you count the years that the songwriting spans), and after all of that preparation and anticipation, all of the piecing together of puzzle pieces, the near aligning of stars, those four days went by in an instant. A densely packed moment that left me both filled and drained.

There is more recording to come – next month Steve and I will continue to record more of my vocals and guitar, more of him playing guitar, and whatever other bits we deem necessary, like some accordion here, a little cello there, you know – so the process is far from done. But, this initial stage has been a biggie.

I can tell you now that is the best project I have ever been involved in. It sounds AMAZING.  And I’m not one to use all-caps lightly. The core players – Chris Gestrin, Niko Friesen, Rob Becker and Steve Dawson – are nothing short of fantastic. My songs and I are downright squee-ful to keep such remarkable musical company on this record. And the studio! Well, the Warehouse Studio’s Twitter bio of “the best studio anywhere” is not an exaggeration. Incredible gear, incredible space, top-notch crew…

Much of my view of the studio was of obscured by pop filters:

But you can see a bunch of other photos up in this Facebook album. Here’s one of my favourites – the lot of us attempting an aloof “rockstar attitude pose” photo: 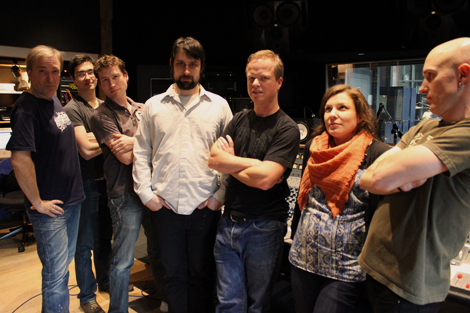 It’s pretty special to get to make music with people, I love that us humans do that.

I love this record already so much.

I’ve been feeling speechless (despite my wordiness here), almost stunned, maybe just depleted… a kind of post-recording funk perhaps, aka the coming down phase. As mentioned, it’s not over, but the four long, busy, exciting, fruitful days were heart-rending too and while adreneline and dedication carried me through the weekend, I’ve been crying a lot since. A kind of release, and also the tears that I fought back so often while in the studio in the interest of time and vulnerability.

I managed one good cry in the lounge while others set-up on day two – thank goodness for that small exhale… Niko ate leftovers and listened and, because he’s the philosophizing type, we wandered into a conversation of our big human emotions in the face of our tiny human existence. As these things go…

The saddest song I’ve ever written is on this album, and completing it, coming close to completing it, feels like taking a step that I’m not quite ready for. A kind of admission, or acceptance. Recording that song is making the story true, more true – I’ve had my share of magical thinking in these past few years and recording is cracking those thoughts open.

It would have been wise to book time off directly following those studio days. Instead Monday morning was up and at ’em for some work at RPM, followed by teaching a workshop on grantwriting for Songweavers Studios… which was great (thank you Songweavers!). But I felt that the momentum of the weekend could have used a natural slowing to a halt, that I would have reveled in a fade out. I feel that I jumped tracks when I needed simply to ride it out.

Tuesday I found some balance between obligation and needing space by working on my laptop but refusing to leave my bed. And Tuesday is when I began to cry, thankfully with no time constraints, and no strangers to witness and wonder.

Today, I have finally had a chance to find some solid ground, thanks to a long shower, a soy chai latte, staring out a window into a sunny day, and the task of folding laundry. Phewf. 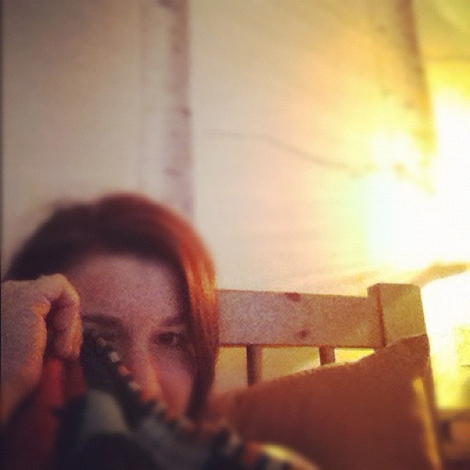