I have said on occasion that I don’t write songs, I just sing them. Which is to say that when the muse comes, when together we are at our best, that’s what it feels like – like a song I suddenly remembered, and maybe always knew.

I was standing at a bus stop in Berlin, in Charlottenberg, when I first sang the first verse to “Parasite.” I quickly and quietly recorded it into my phone (trying to look like I was just talking)  and when I played it back months later, was reminded of that favourite city of mine as a German ambulance siren rings through the voice memo in the background.

Those months later I was at The Hill House in Michigan during a residency I pursued with the interest of sorting through the songs that would become “The Living Record.”  It was just two verses that had come at the Berlin bus stop and there in the upper penninsula where the rest of the song made itself known.

When I played it for my partner he pointed out the inaccuracy of the word “parasite” and I had my own mini Alanis “ironic” moment in defending my artistic licence. For the months until we recorded it, I kept in the back of my mind the thought of replacing the word, but another never came. Indeed in this song, what plauges me (er, the protaganist) has not convinced the host of its own interests, it is rather a fight against the thoughts that won’t let up, the fight against the impossible question “what if.”

But the word stayed.

What didn’t stay was the original tempo. When composed it was much slower, in mind I imagined the final product would be darker, heavier. When Steve Dawson and I were in pre-production for the album his imagination led elsewhere and I followed – the outcome of which is the much more uptempo version on the album.

I love how it turned out.

Often people have said of that album, “The Living Record,” that for lyrics and themes that are darker, heavier, it is musically remarkably upbeat. Well, yes. I don’t think these ideas need to be hammered too hard, I think that a lot of the experiences chronicled on that album are complex – and the contrast reflects that – and I think stories in songs are worth digging for.

When it came to making the video I was lucky to be part of APTN’s First Tracks program which has, for the past few years, employed Big Soul Productions to produce five music videos per year for Indigenous artists. They brought director Adam Garnet Jones on board and over lunch I got to hear the visual ideas the song inspired in him. It always feels a kind of gift to have another artist create work sparked from your own.

(here’s Adam and I on set in what I liked to call our “mad Cowichan disease” matching-ness): 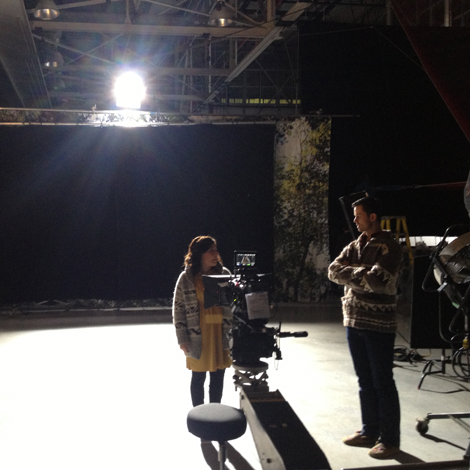 Finding beauty in struggle became the theme and let me tell you, singing that song in double time (due to filming 48fps) while inhaling the bits of feather-down being blown in my face did not feel beautiful at the time. But all in a day’s work.

We filmed the video in November 2012, through the night in the cold, cavernous space belonging to the Toronto School of Circus Arts, beginning with the aerialists’ set up: 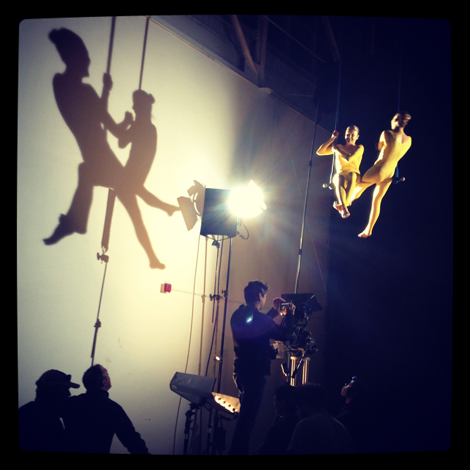 Meanwhile, the lovely and talented Rachelle Whitewind attended to my hair and make up: 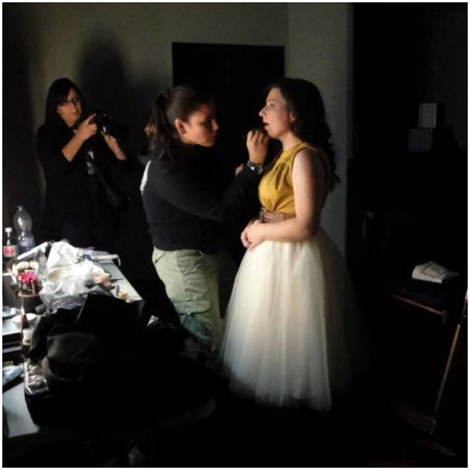 In an ochre dress my dear friend Susan Kendal-Urbach MADE for the shoot.  It was handy that my bosom buddy was hired as cosutme designer – I couldn’t have trusted many other people to hold the tulle skirt in place, so as to avoid flashing the crew, when fans whipped up the “falling”: 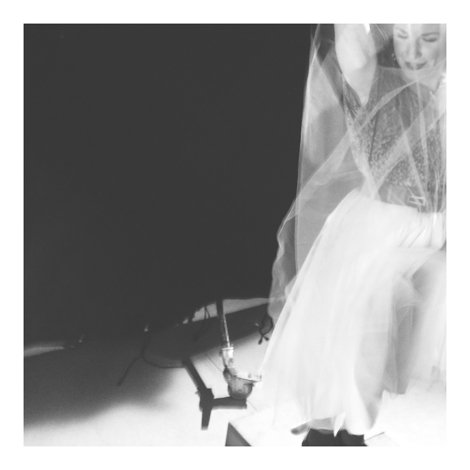 (and I got to keep the sweet belt she found at Anthropologie. Score.)

Fans played a major part in all the scenes – most of the time to blow sundry items at my face while I lip-synced. The bubbles were easy. The feathers, as mentioned, went up my nose.

And the amazing art crew had to sweep it all up between takes to blow across the frame once more: 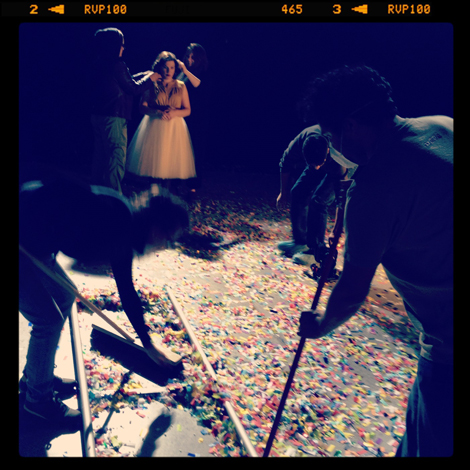 They were a killer crew.

Adam and editor Jay Brant got to work and in March 2013 it was locked and ready. And then we waited. And waited.

APTN had legal dibs on broadcast – other than when I worked with a label on my first album in 2005 it was the first time I’ve not completely owned the rights to something connected to my work. Indeed I left the label for many reasons – that I like being in control of such things being one of them.

But First Tracks – which I think is an awesome series and has made a handful of wicked videos – is what “Parasite” belonged to and we were at the mercy of their scheduling. Except the scheduling never came and eventually APTN decided not to broadcast any of this particular batch of First Tracks videos.

Which is too bad.

And so, from a bus stop in Berlin, to circus school rafters in Toronto, “Parasite”, the official video: