Well this just in:

The Living Record is included in CBC Music’s top albums of the year. Anyone who knows me a little knows how much I love the CBC – it is certainly the source for most of my music discovery and almost all of my listening pleasure. And there’s my album, included among there picks for the year! I’m right chuffed I tell you. The whole post of their top albums is here, and see the blurb on my album here.

I hinted on Facebook as to my not considering “Aboriginal” a genre, and I don’t. I have actually many (quelle suprise) thoughts on the matter of Aboriginal, which is a culture, a race, being designated at the Junos and by CBC alongside genre categories, and have a blog a brewin’ in me on the topic, but regardless I am grateful and thrilled for the CBC love no matter what.

Over at Corby’s Orbit The Living Record is among Paul Corby’s 50 Most Adored and Played Albums of 2012. Huge thanks to the thoughtful and fine tuned ears of Paul for adoring, playing and including the album. Paul who was one of the most prepared and insightful interviewers I’ve ever had and I loved talking to him in October.

Elsewhere, The Georgia Straight’s music critics picked their Top 10 albums of 2012 and I’m delighted that The Living Record is on Alex Varty’s list. Read that post here. I’ve been interviewed twice by Alex – for this album and my last – and both times were meaningful and memorable exchanges. Often conversations with journalists don’t feel like actually conversations, but with Alex they are and so I am touched and honoured to be among his picks for the year.

An added bonus and squee moment was seeing mine and Amanda Palmer’s photo on the main “Best of” page at thestriaght.com. I agree her newest album, Theatre is Evil, deserves to be on top lists for the year all around. She’s certainly on mine!

Here we are, regular cohorts (her pic at the top, mine at the bottom, sandwiching the likes of other 2012 picks Grimes, Patterson Hood and Father John Misty, swoon): 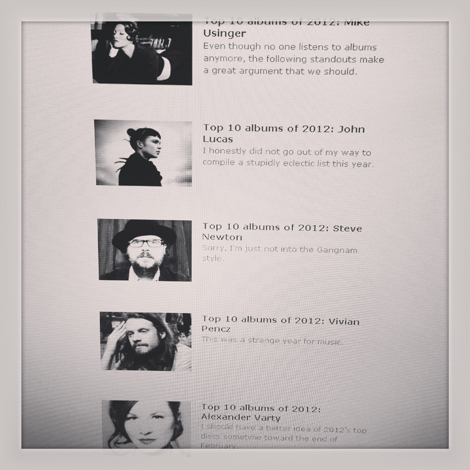 I have to remind myself this album has only been in the world for 3 months – there’s still so much time to share it and spread it and learn it and flaunt it, and I’ll be doing all those things. I don’t know the right word for how it feels for its kind reception so far – grateful and thrilled are part of it surely.

I might not ever find the word, so for now, these two: good night.